Back to top
Modern Languages News 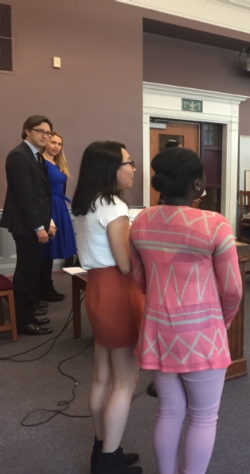 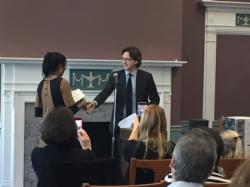 BLS hosted a celebration of teachers from around New England to celebrate book awards from the French Consulate of Boston.

On Friday, November 30, the Consul General of France Arnaud Mentré visited Boston Latin School during R4. He was accompanied by Latifa Bentiri, Cultural Attaché and Edit Dibra, K-12 Education Officer. BLS hosted schools and teachers from around New England to celebrate their awards of books for classroom libraries as part of the Boston Consulate’s program “The Magic of Reading in French”. Thanks to the work of Madame Carole Lapointe-Prospere, BLS was awarded 70 books to be used in the BLS French program to promote reading and Francophonie culture. Mille fois merci to Madame Lapointe-Prospere!
After remarks from Ms. Skerritt and the Consul, students from BLS and the Lyceé International de Boston performed wonderful declamations of French poetry and sang a song in French. BLS declaimers were Christian Badawi, Jason Sénécharles and Christina Francis. Students from French 2 sang. Julia Jean-Baptiste and Viviane Hoang gave beautiful a capella renditions of the national anthems of both France and the US.
Representatives from various winning schools were also in attendance, with some teachers coming from Maine and Rhode Island.
The "Magic of reading in French" project is made possible by the generous support from the following sponsors of the Consulate General of France in Boston: Edenred and The Family Charitable Fund - Catheline van den Branden & Jeffrey Plunkett. The BLS French Program is very grateful for this amazing opportunity for our students!
To learn more about the program, go to the site of Consulate General of France in Boston here: https://boston.consulfrance.org/The-Magic-of-Reading-in-French-Project-brings-free-books-to-your-students