Back to top
History News 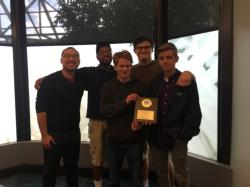 The SUVCW BLS History Bowl team competed at the National History Bee and Bowl Championships. The BLS varsity bowl team finished 25th out of the 144 teams that were invited to compete. The team included Aidan Goldberg (I), Nicholas Weiske (I), Christy Jestin (II), and Joseph Terrey (III). Boston Area JV Bee Champion Joseph Terrey (III) reached the JV Bee semi-finals at Nationals.
The Sons of Union Veterans of the Civil War is a patriotic society, whose members are direct descendants, either through paternal or maternal lines, of Soldiers, Sailors or Marines who were regularly mustered and served honorably, or were honorably discharged from the service during the Civil War, 1861--1865. If you would like more information about the Massachusetts chapter, please contact suvcwclarioncall@gmail.com